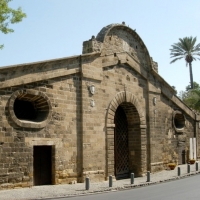 Then called "Porta Guliana" in honour of the architect of the whole city-wall project, it was the strongest and most elaborate, but also the lowest of the three gates. The outstanding and impressing feature of this building with its gateway and its arched passage can still be visited. The entire gate was restored by the Municpality of Nicosia to its former glory and started being used as a cultural center. This effort was rewarded on April 14, 1984, when the Municipality was awarded the prestigious "Europa Nostra" medal by the International Federation of Associations for the Protection of European Culture and Natural Heritage. The Center hosts exhibitions, discussions, music and dance performances as well as other cultural events.

The Famagusta Gate (Pyli Ammochostou), with its impressive wooden door and slanting façade, is the most important of the three gates of the Venetian walls in Nicosia.
Its name comes from the fact that the gate opened onto the road that took travellers to the most important harbour town of the island, Famagusta.
The Municipality of Nicosia won the “Europa Nostra Award” by the International Federation of Associations for the Protection of European Culture and Natural Heritage for the restoration work that took place at the Famagusta Gate in the early 1980s, when it was transformed into Nicosia’s Cultural Centre.
Concerts, exhibitions and other interesting cultural events are held at the Famagusta Gate mainly during the summer months. It is a worthwhile experience to visit the Famagusta Gate when one of these events is taking place.

Scroll Down for the Image Gallery

View the embedded image gallery online at:
https://www.partycity.com.cy/index.php/en/nicosia/item/249-famagusta-gate#sigProIdd02f29ddad
More in this category: « Skali Aglantzias Rantzo Relaxo »
back to top