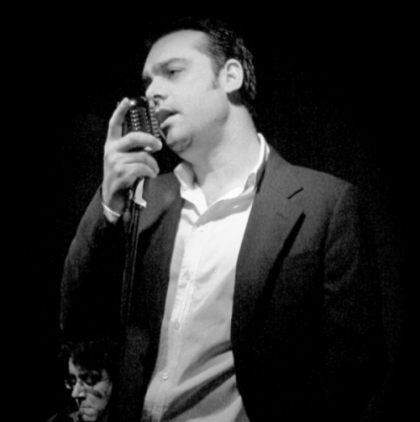 Doros Demosthenous was born in Limassol, Cyprus. He has studied vocals at the National Conservatory of Athens and was awarded the Diploma in Solo singing and Harmony with honours.

While studying in Athens he started establishing himself, having performed with the Orchestra of Colours arguably the finest ensemble in Greece and having sung “The songs of Sin”, the last cycle of songs by Manos Hadjidakis before his death in 1994. The European Limassol Festival presented Doros Demosthenous first solo concert in Cyprus in 1997.

He worked with the director Michael Cacoyiannis at Herodeion Theatre in Athens as well as with the Greek Opera Society in the operas “Dido and Aeneas” and “Carmen”. He has also appeared in Her Majesty’s Theatre and the Theatre Royal Drury Law with Nana Mouskouri.

In 1997 Doros Demosthenous took part in Aristophanes “the Birds” singing the songs of Manos Hadjidakis in the revival production of the Theatro Technis of Karolos Koun. In 1998-1999 he had the leading role in the Musical “Grease” performed in Athens. In 2000 he performed with the OSSIPOV Orchestra of Russia singing songs of Mikis Theodorakis.

In 2001 and 2002 he took part in the performance of the cycle of songs of Manos Hadjidakis “The Era of Melissanthi” with Maria Farandouri and Alikoos Ioannidis, and “Magnus Erotikus” with Elli Paspala, performed by the Manos Hadjidakis Musik Ensemble.

In June 2003 he sang together with Maria Farandouri the unfinished work of Manos Hadjidakis “Amorgos” based on a poem of Nicos Gatsos in its first public performance in Herodeion.

In 2004 he took part in the performance of Aristophanes “The Birds”, an international production directed by the world famous director Claude Crespin, which was presented in Athens within the framework of the cultural Olympiad.

He has also appeared in concerts with many of today’s leading Greek composers, such as Nicos Kypourgots, Lena Platonos, Demetris Layios, Christos Leontis, Dimitris Papademetriou and Michael Christodoulides.

He recorded an LP CD with 16thcentury lyrics, music composed by Michael Christodoulides and participates in the LB CDs of Nicos Kypourgos “The Secret of the garden” and “Garden-Theater”.

http://www.youtube.com/watch?v=be9MKcU0A6E  one more for the road